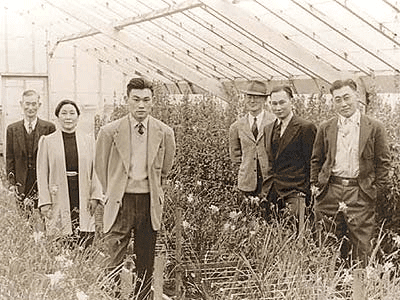 The Korematsu family in their plant nursery before World War II with Fred third from left. While his Japanese-born parents left in the evacuation, he stayed behind with a girlfriend. “I didn’t think that the government would go as far as to include American citizens,” he said. In perhaps the darkest/saddest Supreme Court decision in our country’s history, in Toyosaburu Korematsu v. United States, 323 U.S. 214 (1944) the Court upheld the Civilian Exclusion Order No. 34 of the Commanding General of the Western Command, U.S. Army, which directed that after May 9, 1942, all persons of Japanese ancestry should be excluded from that area. Fred Korematsu became synonymous with this nation’s agonized debate over civil liberties during time of war. He died at the age 86. Last June, the U.S. Supreme Court ruled that the Bush administration’s policy of detaining foreign nationals without legal process at Guantanamo Bay was illegal. The tragedy of the wrongul internment of Japanese-American citizens is included in the video Riff for Justice and the PBS Special Of Civil Rights and Wrongs: the Fred Korematsu Story. In 1998 President Clinton awarded Fred Korematsu the Medal of Freedom.