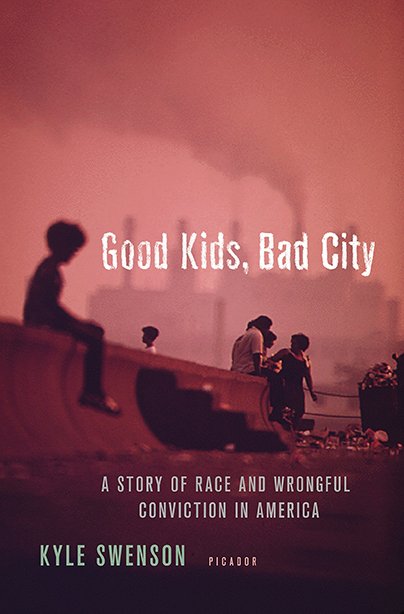 The review is reproduced with permission below:

Three innocent men, wrongfully imprisoned for a combined 106 years — a dismal American record — walked free from a Cleveland, Ohio, courthouse in November 2014. Despite their innocence, they had been convicted of murder in 1975 based on the eyewitness testimony of a 12-year-old boy, allegedly coerced by police into fabricating his testimony.

The men were sentenced to “death by electricity.” The eyewitness, Ed Vernon, would eventually recant decades later, after the Ohio Innocence Project got involved in the case. But that might never have happened if Kyle Swenson, the author of Good Kids, Bad City: A Story of Race and Wrongful Conviction in America, hadn’t been laid off by the Nashville City Paper in 2010.

Allow me to explain. Kyle Swenson worked as a reporter for the Nashville City Paper until February 2010, when bottomline cutbacks forced him out.  And as many readers of the Tennessee Bar Journal will already know, the City Paper itself would fold soon afterwards.  Losing his job at the City Paper marked the second time Swenson had been laid off from a reporting post in his fledgling career. He was thinking of quitting altogether, maybe going to law school.  Instead, he returned to his hometown, Cleveland, Ohio. In May 2010, Swenson took a job at the Cleveland Scene, then under the same ownership as its counterpart Nashville Scene.

Meanwhile, in Cleveland, Kwame Ajamu (born Ronnie Bridgeman) had been paroled, after 28 years in prison, and was looking for a way to impress upon someone — anyone — both his own innocence and, more urgently, the innocence of his brother, Wiley Bridgeman, and childhood friend, Ricky Jackson, both of whom were still in jail. Kwame had contacted a civil rights attorney, Terry Gilbert, about his prospects. Gilbert knew that Kwame had no chance in the legal system without new evidence, witnesses, or information. So Gilbert suggested Kwame contact a reporter to do some digging. He suggested that Kwame call Kyle Swenson. For whatever reason, Swenson took Kwame’s phone call and agreed to hear him out.

In Good Kids, Bad City, Swenson cites a study that “puts the number of innocent inmates between 1 and 5 percent of all convictions.”1 But, as Swenson observes, “what frustrates a determination of the actual problem is the avalanche of frivolous claims … [it’s] like looking for a ‘meritorious needle in the meritless haystack.’” How could he be sure Kwame was telling the truth?  There was something about Kwame’s demeanor in making his case — calm, fact-driven, methodical — that struck Swenson as believable. And Kwame’s obsession with liberating the two men left behind in prison was difficult to explain — unless Kwame really was innocent.

An almost trivial detail underscored that Ed Vernon’s testimony must be false. Vernon had claimed that he was riding a city bus home from school when a car pulled up to the driver’s side.  He’d testified that he saw the Bridgeman brothers and Ricky Jackson in the car as the bus and the car made a left-hand turn. But on a cold day in March 2011, Swenson, standing next to Kwame, watched a city bus make the same turn — from a single turn lane. There was no way two cars could make the turn at the same time. In that moment, Swenson suddenly understood that what Vernon described was impossible. And the terrifying inference knocked the breath from his lungs: the three men were innocent — and two of them were likely to die in jail.

In June 2011, Swenson’s long-form article on the case, “What the Boy Saw,” ran on the cover of the Cleveland Scene.  The article exposed several inconsistencies in Ed Vernon’s story (Vernon declined to be interviewed for the article).  While the article drew praise, nothing seemed to happen. A year and a half went by. Swenson took another journalism job in Miami. Then, in the fall of 2013, Swenson got a phone call from Brian Howe, an attorney at the Ohio Innocence Project. “Ed has recanted,” Howe said.

When the OIP first looked into the case, the legal task seemed insurmountable — there was no DNA evidence that could prove the men’s innocence. And under Ohio law, as with the national trend, a mere recantation was not enough. One study, cited by Swenson, found that “of the first 250 DNA exonerations, 190 involved eyewitnesses. In six of those cases, witnesses later came forward to recant, but judges in none of the six reversed the original conviction on the basis of the new testimony.”2  The Innocence Project attorneys had to come up with an angle. They argued that because Vernon was pressured and threatened by the investigating officers, the police coercion itself was exculpatory evidence that should have been provided to the men’s defense attorneys.

Of course, the key to the argument was Ed Vernon. Swenson’s telling of Vernon’s ultimate recantation reads like a liturgical celebration. Vernon’s pastor, Anthony Singleton, read the 2011 Scene article and recognized the Ed Vernon in it as the troubled former drug addict in his congregation. Singleton suddenly understood the demons Vernon had been living with for so long.

In one of many high drama moments in Good Kids, Bad City, Singleton’s outreach to Vernon — at death’s door, in a hospital gown — stresses that there is nothing inevitable about the exoneration of the innocent. Chance occurrences — a reporter taking a call, a pastor glancing at a magazine — may make all the difference.

Good Kids, Bad City deserves your attention. And not merely for the sadly familiar story it tells. It merits reading — dignified with a pair of eyes and a comfortable chair — for the way the story is told. As Swenson reflects: “we’re accountable for what we see in the world, and more importantly, we’re responsible for what we don’t see.” Choose to see this story.

Christopher Smith is a lawyer with David Randolph Smith & Associates in Nashville. His practice centers on civil rights and personal injury matters. He is a 2015 graduate of Belmont College of Law.